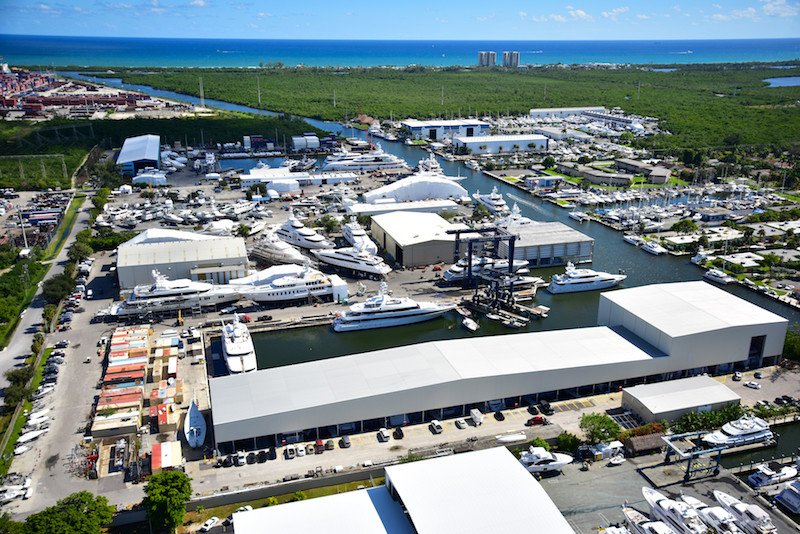 Yacht charters give owners and clients more control during the pandemic

When most people think of a family vacation, chartering a megayacht is usually not among the options. That’s because most people don’t have tens of thousands of dollars or more to spend for a week or two in paradise.

That doesn’t mean, however, that there isn’t a market for it. There is, and Derecktor shipyards is in the middle.

Derektor DaniaDania Beach, Florida calls itself a comprehensive large yacht facility, regularly dealing with the construction, repair and refitting of yachts up to 200′.

“We call ourselves a full working shipyard. We are a full-service yard with multiple boats and multiple customers,” Derecktor Project Manager Mark Russell said in 2020. work boat maintenance before the pandemic.

Last February there were boats throughout the property, many of which have been painted in addition to other services. For example, there was a boat about 100 feet wrapped in a cocoon of white tarp that was getting a new paint job that would cost about $1 million. “It costs about $60,000 to $80,000 to remove all the deck hardware,” Russell said. It also takes weeks just to erect the scaffolding.

Derecktor Dania has about 80% repeat customers. Russell said some of the yard’s regular customers own boats that are only used by the owners themselves, “but most of the boats are chartered”.

More than any other sector of the workboat industry, passenger ships have been the most affected due to the restrictions put in place because of Covid-19. From coast to coast, tours, excursions, sightseeing, overnight cruise ships and restaurant boats have had to shut down for at least part of the past year. Those who are in business handle a fraction of the customers they usually do, and more importantly, a fraction of what they need to survive financially.

Derecktor Dania, however, is still thriving and more.

“We’ve had challenges over the past year, just like everyone else,” Justin Beard, chief marketing officer for Derecktor Shipyards, said in January. “But Dania continues to be a full-service yard.”

Inevitably, the question of Covid-19 arises because it is the pandemic that has created most of the challenges on the site. “Actually the charter business did better than you thought it would,” Beard said. “You can really socially distance safely, and boat owners have been very particular about the protocols on their yachts.”

About 110 miles north of Dania Beach, plans to convert the century-old port of Fort Pierce into a repair and overhaul facility for the world’s fleet of megayachts and tall ships are advancing at full speed.

“We’ve been on full steam since late November, early December,” Beard said. “We hope to be out by May 1.”

Derecktor contracted Shore Foundation Inc. to develop a new beaching basin at the harbor by digging out a 220’×50′ portion of the existing concrete wharf and creating a slipway where the 1,500 ton mobile boat hoist will lift yachts up to 250′ in length out of the water for service.

The construction also includes the installation of a utility loop covering the perimeter of the facility and providing electricity, water and fiber optics; converting the aging Indian River terminal into a state-of-the-art workshop; piping a new high risk level 2 fire suppression system; repair existing partitions; and a host of other necessary infrastructure improvements.

“This is a pivotal moment for Derecktor Shipyards and St. Lucie County,” Beard said. “While a tremendous amount of preparation has already gone into this project, the real work has only just begun. There will be increased construction activity at the port over the coming months as we prepare the facility for the transportation operations.

Derecktor expects construction of the slipway to take about five months. At the same time, a 120’×75’×85′ mobile boat winch will be shipped from Cimolai Technology in Italy to Port Everglades, then trucked in containers to Fort Pierce. “This yard is going to be an economic engine for years to come,” Beard said.

The recreational boating market has exploded in the past nine months due to the pandemic. People were taking water to get away from people on land.

This scenario has also been a driver for the charter yacht market for boats under 100′. One from Clearwater, Florida. Marine MaxThe specialty of is the rental of catamarans in destinations such as the Bahamas, the British Virgin Islands, the Whitsunday Islands (Australia), the Pacific Northwest, Greece, Saint Lucia and the Grenadines and northern Croatia .

Much more affordable than megayachts, these boats are similar to renting a condominium in one of these locations. The price isn’t cheap, but if you can afford a condo, you can probably afford one of the 36′, 44′, 48′, or 55′ rental catamarans, especially if someone in your group can also drive the boat.

“All you have to do is prequalify yourself by filling out one of our resumes,” said Raul Bermudez, Vice President, Marine Max Vacations. “If this holds true, we give you a boat briefing and a chart briefing and you’re on your way.”

If you have a little more change in your pocket, you can hire a driver and a cook. MarineMax’s all-inclusive charter includes a captain, onboard chef, all meals and snacks based on your menu selections, beverages including spirits, beer and wine, fuel, snorkel gear snorkeling, a stand up paddle board and a kayak. Also included are mooring fees, cruise taxes and yacht insurance. “There’s plenty to keep you busy,” Bermudez said.

Another way is to buy one of these yachts, similar to a condo owner who uses the condo for a certain amount of time each year and rents it out the rest of the year. MarineMax’s yacht charter program offers two ways to get paid for a vacation in the British Virgin Islands.

First, you have access to your boat for up to nine weeks a year without having to deal with operating expenses such as insurance, dockage or maintenance, while receiving a monthly income and life savings. potential tax.

With the second option, Split Revenue Ownership, MarineMax takes care of the bookings, marketing and customer relations for chartering your boat while you benefit from 75% of the revenue generated. You will have to cover some expenses, but with this option you can use the boat as much and as often as you want.

How popular are these holidays? “We have a backlog of reservations,” Bermudez said.